Posted at 14:45h in Mpumalanga by Hugh Bland
Share 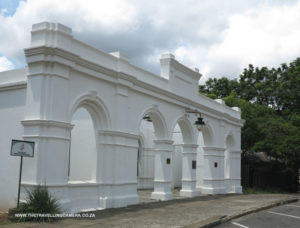 Facade of the old Stock Exchange Building dating back to 1887.

Auguste Roberts (“French Bob”) discovered gold in Concession Creek on 20 June 1883. This discovery resulted in a gold rush to the area.

The town was named after Graham  Barber who discovered a rich gold-bearing reef there in 1884.  It had at first been named Blandstown after a settlement first established by JBA Bland and his wife and three children. (Ref; Louwnds)

At first it was just a simple mining camp but grew when Edwin Bray, a prospector discovered gold in the hills above Barberton in 1885 and with 14 partners started the Sheba Reef Gold Mining Company.

Large amounts of money flowed into Barberton and the first Stock Exchange to operate in the then Transvaal opened its doors. More buildings were erected, billiard saloons and music halls established.

Barberton flourished for only a brief period and soon the inhabitants began to move away to the newly discovered gold fields on the Reef. Ref: Wikipaedia.

This gallery displays images of the Barberton CBD, which includes the front façade of the old Stock Exchange.