Posted at 15:37h in Mpumalanga by Hugh Bland
Share 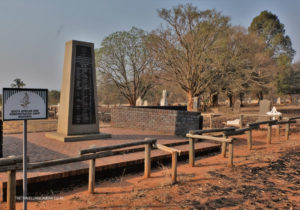 In addition to the Military Garden of Remembrance to the east of Barberton, is the old cemetery dating back to the early days of the town founded in the 1880’s.

Many of the old graves have disaspeared, however the old cemetery has a few remaining graves, a memorial to the internees who died in the large Concentration Camp opened here during the South African War and some S.A. Military graves relating to WWII.

The Barberton camp was opened in February 1901 on the south west of the townand by August 1901 had over 1000 internees, which grew and a second camp had to open with an influx of Boers.