Posted at 14:57h in Free State by Hugh Bland
Share 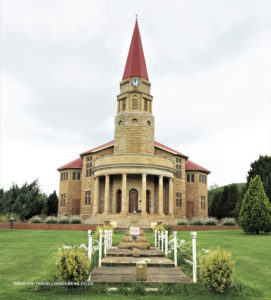 It is named after the Reverend Dr. John Daniel Kestell (1854 – 1941), Anglo-Afrikaner minister of the Dutch Reformed Church from 1894 to 1903, author and cultural leader, who played an important role in the Anglo-Boer War and later helped with the Bible translations into Afrikaans.[2] The Dutch Reformed Church building, designed by famed architect of dozens of churches and the Voortrekker Monument, Gerard Moerdijk, was inaugurated on 31 March 1928.

The township was surveyed and laid out by William Homan in 1905. ref: Wikipaedia.

This little town is renowned for the sandstone houses and Government Buildings hewn from the local sandstone hills.