Posted at 11:33h in Free State by Hugh Bland
Share 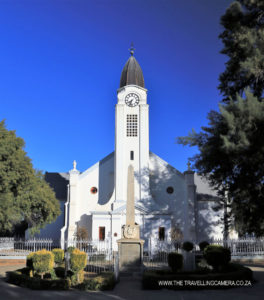 Jacobsdal is a small farming town in the Free State province of South Africa. The town was laid out in 1859 by Christoffel Jacobs on his farm Kalkfontein.

A visit to the town on the Riet River, will expose you to much that has not changed in 100 years and dates back to the discovery of diamonds in 1867.

Military action
“Jacobsdal saw plenty of military action during the Second Anglo-Boer War of 1899–1902 because it was close to the two strategic towns of Kimberley and Mafeking. The wounded from the battles of Belmont/Graspan, Modder River, Magersfontein and Paardeberg were nursed in the town.

When, General Cronje was outflanked by his enemy General French’s dash to relieve the siege of Kimberley, and retreated to Jacobsdal from Kimberley. On 15 February 1900 as the British approached the town he departed from Jacobsdal with 5000 men, women and children. Later that day the British captured the town, making Jacobsdal the first Orange Free State town to be occupied. ”

This was followed by the defeat of Gen. Cronje at Paardekraal.

“During the British occupation, the occupiers were surprised by an attack by the Boers that resulted in the death of 23 British soldiers. The British retaliated by burning down twenty houses and interning all the town’s women and children in a concentration camp in Kimberley. Later in 1900 the British erected a blockhouse near the town on the road to Paardeberg. Its rectangular shape is one of only 12 blockhouses with that shape in South Africa.

A memorial to the dead from the Battle of Roodelaagte stands in front of the NG church. In 1968 a memorial was erected in the Jacobsdal cemetery which commemorates British and colonial men who were buried in the cemetery.” .

“During the Second World War, Italian prisoners of war were held near Jacobsdal and Koffiefontein. Their labour was used to construct the Riet River Irrigation Scheme which extended the existing water scheme.” With thanks to Wikipedia for this information

This post has images of the NGK, the blockhouse, memorial of The Battle of Roodelaagte, and some of the older buildings in the town.