Posted at 16:15h in Eastern Cape by Hugh Bland
Share 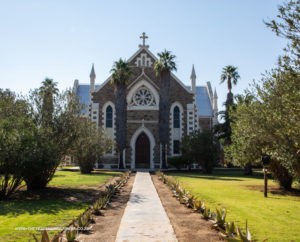 Jansenville lies on the Sundays River in the Eastern cape on the southern plains of Camdeboo.

The town was formerly part of the 3000 morgen farm, ‘Vergenoegd’ and the town was proclaimed in 1855. It was named after General Jan Willem Jansens (1762-1838), the last Batavian Governor of the Cape.

The town is a welcome stopover to the inland from Port Elizabeth and the ‘Farm Stall’ a favorite for travelers. A visit to the Dutch Reformed Church, built of stone is recommended. The church was consecrated in 1885 and an ornate wooden pulpit. Also in the town are the Sid Fourie Museum and Mohair Museum. Wool was a large income earner in this part of South Africa.