Posted at 15:10h in Botswana & Namibia by Hugh Bland
Share 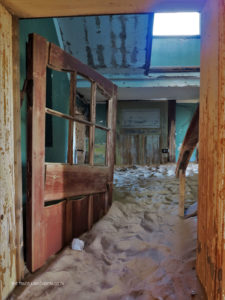 Kolmanskop is named after Johnny Coleman who was a transport rider and stopped over at this point. The site was part of the diamond mining enterprise stated in 1908 after Zacharias Lewals found a diamond whilst working in the area. German miners began the settlement which has since been abandoned and the desert encroaching once again on the village which is now a tourist attraction.

The original German styled village had a hospital, power stationshool, sports hall and many more facilities now in ruin.

By the 1950’s the local diamonds were depleted and the town abandoned in 1956.

Kolmaskop is only 10 kilometers from Luderitz and popular with photograhers or those inclined to nostalgia.