Posted at 11:49h in Botswana & Namibia by Hugh Bland
Share 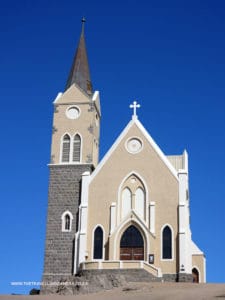 In 1487 Bartolomew Diaz landed in Luderitz Bay and erected a Padrao near the harbour , one of many that he erected to mark his journey around the coast of Africa. The Germans had colonized what was to become German South West Africa and the town of Luderitz was formed in 1883.

The town was a small fishing village but in 1909 with the discovery of diamonds a small mining village sprung up in 1909. A railway line was constructed inland towards Aus but later fell into disuse as did the diamond town of Kolmanskop when the diamond operations moved further south.

The German architectural influence is plain to see in this Namibian fishing village and there is a road link inland through the desert.