Maitjiesfontein and the Geelbek Block-house

11 Apr Maitjiesfontein and the Geelbek Block-house

Posted at 12:49h in Western Cape by Hugh Bland
Share 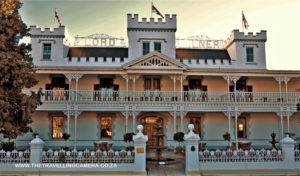 With thanks to the Lord Milner Hotel.

Matjiesfontein was founded in 1884 by the Scottish railway man, James Douglas Logan. The village established itself as a fashionable Victorian health spa, and is now well known for its splendid historical buildings and a peace and timelessness that is rare in modern-day South Africa…

Matjiesfontein is a feast for the imagination, between these walls lie a colourful history that includes international cricketers, fortification during The South African War (formerly known as The Anglo-Boer War) as headquarters of the Cape Command, refuge for Jamieson Raid reformers, and the venue of controversial war crimes hearings.

The double-storey Milner Hotel was built in 1899 by James Logan, in the early stages of The South African War. The hotel was used as a military hospital during the conflict with British forces and the hotel turret was then used as a lookout post. Some 10 000 troops were camped around the village during this time. James Logan, founder of Matjiesfontein, died in 1920 and is buried in a little cemetery 10 kilometres from Matjiesfontein. His tomb is located next to the grave of George Lohmann, a famous English cricketer who spent the last years of his life in the superb climatic environment of the Karoo.

In 1968, David Rawdon, hotelier par excellence whose claim to fame includes establishing Rawdons Hotel at Nottingham Road, the well-known Lanzerac Hotel set in the Stellenbosch vineyards, the Marine Hotel Hermanus, and The Drostdy Hotel in Graaff-Reinet, purchased Matjiesfontein Village. After performing extensive renovations and utilising the wealth of antiques gathered during his world travels, David reopened the hotel in 1970, renaming it The Lord Milner Hotel.

The extravagant Royal Lounge portrays the life of James Logan and other famous Victorian personalities who occupied or visited the village over the last century. The grandeur of Matjiesfontein stretches back to a heyday when the village was a fashionable health spa that attracted visitors from all over the world, including Lord Randolph Churchill (father of Winston), Cecil John Rhodes, Rudyard Kipling and of course, Olive Schreiner.

During the Anglo Boer War of 1899-1902 blockhouses formed an essential part of British military strategy against Dutch force, particularly in the latter stages of the war.  These were  were used to guard key military points, but later to stop the Boer guerrilla forces moving from area to area in all provinces. Some 8000 blockhouses were built for the duration and varied in design and size. Key pointa had substantial structures like the Geelbek River blockhouse overlooking the main north-south rail route.