Posted at 12:45h in Free State by Hugh Bland
Share 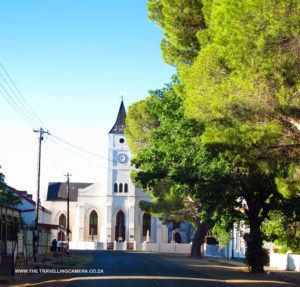 Philippolis is the first town build in the Orange Free  and the town is the birthplace and hometown to many South African celebrities including, the writer  Sir Laurens Van Der Post.

Today the heritage status of the town attracts visitors and holiday makers and the town has converted many of its heritage buildings into accommodation.

The town is also a good springboard to visit Tiger Canyon a Tiger Sanctuary run by conservationist, John Varty.

The London Missionary Society (LMS) founded Philippolis in 1823 as a mission station for the local Griqua nation.  The town takes its name from Dr. John Phillip  who was the superintendent of the LMS from 1819 to 1849. Adam Kok II, a Griqua leader, settled here with his people in 1826 and became the protector of the mission station. Kok II and some of his followers moved to Philippolis from Griquatown (about 200 km away) after there had been factional disputes in the area.. Kok’s son, Adam Kok III and his followers later to settle in Kokstad in Griqualand East.

The town has a number of heritage sites including an historical jail that has been turned into a bed and breakfast guest house.

The Emily Hobhouse Memorial commemorates human rights activist Emily Hobhouse who helped expose and publicize British maladministration and deaths in the concentration camps by during the Boer War. After the war, Hobhouse established a spinning and weaving school in Philippolis in 1905.

The Transgariep museum was opened on 2 March 1982. It focuses on the London Missionary Society and Emily Hobhouse and her weaving school.

The town jail was built in 1872 and served as a jail for 70 years. It was subsequently converted into a police station and several changes were made such as the repurposing of jail cells into charge offices. The South African Defense Force used the jail as an army barracks from 1972 to 1982. The jail was abandoned from 1982 until 1998 when it was restored and turned into a bed and breakfast guest house.

The Dutch Reformed Church (NGK) in Philippolis was opened in 1871. The church is famous for its pulpit which is carved from wild olive and erected with no nails, screws or bolts. This site is a declared Provincial Heritage Site.

Some of the other heritage sites include: