Posted at 14:11h in Western Cape by Hugh Bland
Share 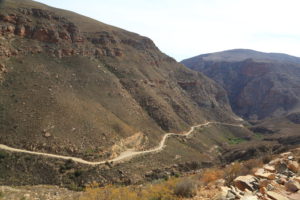 North of the Cango valley is the Swartberg Pass. Prior to the building of this pass there were only two unreliable passes through the Swartberg,connecting the Little Karoo and Big Karoo, that were often impassable.

At the request of the farmers, Thomas Bain was instructed to survey a route over the mountains, and work was started in 1881, but the peak was only reached from the Prince Albert side in 1884. With major washaways during the course of construction, the pass was finally completed in 1887, and opened on 10 January 1888.

The pass at its peak is 1557 above sea level, and 1220m above the Little Karoo. Its steepest sections have a gradient of 1:8 , over this 30 km long gravel pass. Ref: On Route in South Africa –  – Jonathan Ball Publishers.

The route has dramatic scenery, and the views on both sides of the pass are breathtaking. The stone parapets add a small sense of comfort against the steep dropoffs. A recommemnded route in my view when starting from Oudshorn, would be over the Swartberg pass, a visit to Prince Albert, and a return via Meiringspoort.