Posted at 12:07h in Eastern Cape by Hugh Bland
Share 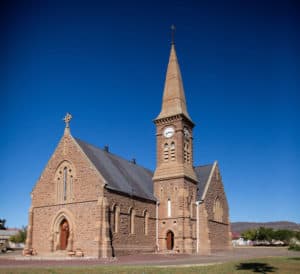 Tarkastad is situated on the banks Tarka River  and lying north of the Winterberg Mountains, between Cradock and Queenstown.  The town is overlooked by Martha and Mary; two peaks which look like two women resting.

After the SAN,  the first european farmers settled in Tarkastad in 1795 and built watermills, inns and both a Dutch Reformed and Presbyterian Church.  Two Great Trek leaders, Andries Potgieter  and Piet Retief, farmed here for a short while. After the Dutch farmers left, the English 1820 settlers moved in, and in 1862 Tarkastad was established as a church centre and became a municipality in 1864.  Elands River Poort, a mountain pass located on the Karoo, 24 km to the NNW of Tarkastad, where the Battle of Elands River (1901) was fought during the Anglo Boer War (1899-1902).

This album has images of the churches, old buildings, Royal Hotel and the WWI and WWII monument in the town. The NGK Kerk is covered in detail in this post.